The defensive woes for the Cleveland Cavaliers continue in their 103-74 loss to the San Antonio Spurs. And to be honest, it was a clear struggle on both side of the ball for the Cavs. 74 points marks Cleveland’s worse scoring quarter this season, shooting 37% from the field and only 15% from three.

The loss drops Cleveland to second place in the Eastern Conference, with Boston taking a half game lead and the first seed. The last time Cleveland wasn’t the top seed in the East was November 5 2015. Cleveland has lost four of their last six contests, but with nine games left on the regular season schedule the battle for the first seed is just getting started. 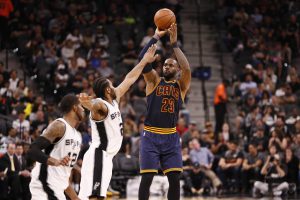 The Spurs lead the Cavaliers by ten points after the first quarter and never looked back. With the game very much up for grabs the Spurs started heating up in the second quarter which turned into a 24-8 Spurs run. Just before the run started, Spurs Head Coach Greg Popovic was given a technical foul, which put a fire under his players. During this run, the Spurs shot 64% from the field.

Cleveland couldn’t get anything to fall against one of the best defensive teams in the league, shooting under 40 and 20 percent from the field and behind the arc. LeBron James finished with 17 points, 8 rebounds, and 8 assists, while Tristan Thompson was the only other Cavalier in double-figures with 11.

Kyrie Irving finished the game with just 8 points on 4-13 shooting from the field. This performance ended his 21 game streak of 20 or more points scored in a game. Irving’s performance prompted him to get shots up after his worst game since the All-Star break.

Kyrie remained on the court after the game, practicing his shot and clearing his mind after the @cavs' tough night. pic.twitter.com/tDjda8mkxK

Kevin Love, who is still getting used to in-game action after missing 13 games with a knee injury finished the game with 9 points to go along with 7 boards.

What’s Next for the Cavaliers? 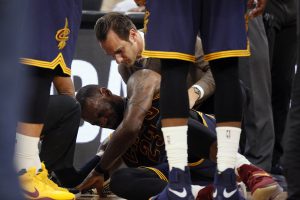 Cleveland currently sits half a game out of first place in the Eastern Conference with nine games left to play this season. In this month alone, the Cavaliers have played 16 games, with two more coming  on Thursday in Chicago and Friday at home against Philadelphia.

According to LeBron, who was forced to leave last nights game after getting elbowed in the back, the schedule isn’t an excuse to their poor play this month.

Three of Cleveland’s next four games are coming against teams with a record under .500, but after that stretch they only play teams that are in the Easter Conference playoff race. One of those matchups include a meeting with Boston, who as I mentioned before, is ahead of the Cavs for that top spot in the East. After Boston, Cleveland close off the regular season with two games against the Atlanta Hawks, on the road in Miami, and a home matchup with the Toronto Raptors.