A Look at Florida’s Defensive Line

The Florida Gators have been a top notch defensive program for over a decade now. When Florida brought in Jim McElwain to be their head coach, they were hoping for improvement on the offensive side of the ball. Florida got what they wanted, but the in the end, it’ll always be a program known for their defense.

Last season, the Gators defense ranked sixth in the nation, only allowing 17.9 points per game while limiting opposing passing attacks to under 160 yards per game. The area where they struggled was defending the run, allowing nearly 150 rushing yards per game to opposing teams. This will be the main area to improve on the defensive side of the ball, and the Gators will have to do so with a line filled mostly with underclassmen.

With Spring football coming to an end, it’s time to take a look at the the defensive lineman who need to step up with the loss of Caleb Brantley, Joey Ivie, and other former Gators.

Looking at the defensive ends for Florida, they have a good amount of returning players from last season who made an impact. Two of the names that stick out are Jabari Zuniga and Jordan Sherit. As a Redshirt Freshman Zuniga played in all 13 games for the Gators, earning the start in three of those games. He totaled 25 tackles on the season, including one forced fumble, 8.5 tackles-for-loss and a team-best 5.0 sacks and 11 quarterback hurries. 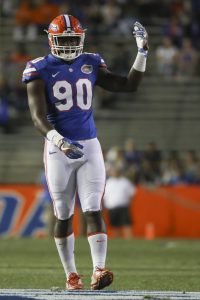 Sherit, the lone senior on this defensive line, appeared in 10 games last season and recorded seven starts. Sherit’s main issue was injuries which cause him to miss a few games last season. When healthy, Sherit is a dominate force on the field. In his limited time, he recorded 38 tackles, 5.0 tackles-for-loss, 3.5 sacks and two quarterback hurries.

However two players in particular are ready to make names for themselves as elite players on an elite defense. Those two being Antonneous Clayton, and Keivonnis Davis.

Clayton hasn’t quite lived up to his 5-star billing, and he is fully aware of that. Despite playing in only five games during his freshman season, Clayton says his potential is endless. In those five games in 2016 he totaled three tackles, three quarterback hurries and one recovered fumble. It’s almost a tradition that the defensive linemen who come to Florida will eventually end up on NFL rosters. They are all aware of it coming in, and Clayton says he and the rest of the group are ready for those expectations.

Keivonnis Davis appeared in all 13 games for the Gators and started five during the 2016 season. He totaled 27 tackles, 3.0 tackles-for-loss, 1.5 sacks, five quarterbacks hurries and one forced fumble. Davis’ five QB hurries was tied for second on the team, while his 2.5 sacks tied for fourth. 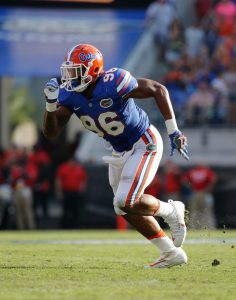 Last season, Caleb Brantley led this group on and off the field. He showed clear NFL talent during the 2016 season, thus declaring for the NFL draft. With the loss of Brantley, someone from this unit will have to step up. Luckily for the Gators, they have four guys who can do so. These players include Cece Jefferson, Khairi Clark, Taven Bryan, and Jachai Polite.

Jefferson is clearly one of the Gators’ best defensive linemen and will have a central role in 2017. He played every defensive lineman position last year, but excelled on the inside. With Brantley gone, Jefferson will have the biggest challenge of anyone on this defensive line. In his 12 games in 2016, Jefferson started in six, totaling 30 tackles, 6.5 tackles-for-loss, 1.5 sacks and five quarterback hurries.

Khairi Clark is one of the “veterans” on this roster. Clark is going into his Redshirt Junior season, meaning this will be his fourth year as a Gator. With that in mind, Clark believes that the younger players can really learn from him, not only as a player, but as a teammate.

Last season, Clark started in three of the 13 games for the Gators. He totaled 16 tackles, one tackle-for-loss and one sack and was named to the SEC Academic Honor Roll. Those numbers don’t stick out to many, but Clark says he has improved tremendously during the spring.

Taven Bryan is another Redshirt Junior for the Gators. During the 2016 season, Bryan only started two games, but appeared in all 13. Bryan totaled 17 tackles, three tackles-for-loss, one sack, two quarterback hurries and one pass breakup. Not only that, but he led the team with two forced fumbles and two fumble recoveries…

Jachai Polite played in 12 games throughout the 2016 season as a reserve defensive lineman. He totaled 11 tackles with 3.5 of those being tackles-for-loss, 2.0 sacks, one quarterback hurry and one forced fumble.

This defensive front is much younger than what the Gators are used to having on their roster, but with the leadership from the upperclassmen Jefferson, Sherit, and Clark, this Gator defense should continue to dominate the SEC and all of college football.